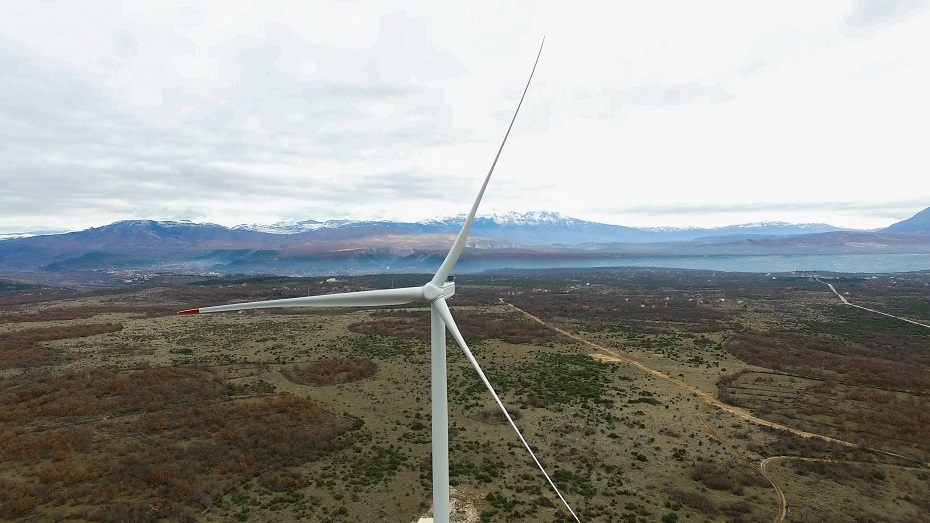 In Croatia, near Knin, Petrol started the operation of its second wind farm, which will provide “green, sustainable energy” to as many as 30,000 average households. Nine wind turbines will annually generate around 96 GWh of electricity. This wind farm also marks the first Petrol project that was fully implemented without any financial support or grants.

Petrol wants to make its contribution to the reduction of greenhouse emissions, which is why it is developing and investing heavily in energy generated by wind and solar power plants, and small hydropower plants. “The global energy system is witnessing rapid development, influenced by both the increased energy demand and environmental requirements designed to combat climate change. With this in mind, we are pursuing the generation of electricity from renewable energy sources – wind, water, and sun. The generation of electricity from renewable energy sources plays a special strategic part in Petrol’s decision to become a modern sustainable energy company, as it is one of the key activities for the future development of the Petrol Group,” said Jože Bajuk, MSc, Member of the Management Board of Petrol, responsible for the Energy and Solutions pillar.

Petrol is implementing most of its projects in the field of energy generation from renewable energy sources in Croatia, Bosnia and Herzegovina, and Serbia, which boast significant wind, sun, and water potential. “By building our own generation capacities, we are following our strategic goal to become a renowned regional provider of comprehensive energy and environmental solutions, as well as a partner in the development of the circular economy for the transition into a low-carbon society,” emphasised Borut Bizjak, Director of the Division for Generation of Energy from Renewable Sources.

Petrol sees great potential primarily in wind energy, as wind is set to become the main source of energy in Europe by 2030. This is why Petrol is planning, building and managing wind farms in locations where it is possible to exploit the wind potential in an economically efficient and environmentally friendly way. Petrol started the operation of 9 wind turbines in Croatia, near Knin, which form the Ljubač Wind Farm that boasts a capacity of 30 MW. The planned annual electricity output of the nine wind turbines is 96 GWh, which is sufficient to cover the energy demand of as many as 30,000 average households.

The Ljubač project, for which the Nordex Group supplied the wind turbines, is Petrol’s first project in the field of wind power generation that was implemented without subsidies or grants. Thus, clean and sustainable electricity will be available to users, without burdening the state budget or the end users. “Petrol will supply the electricity generated in this wind farm to the market, in line with the market conditions, via our own infrastructure,” added Bizjak.

The start of the Ljubač Wind Farm’s operation means that Petrol now has two wind farms in Croatia. In 2017, the company established the Glunča Wind Farm, near Šibenik, which consists of nine wind turbines, each boasting 2.3 MW of rated power, which provide enough energy for 15,000 average households. Together with Ljubač WF, they now generate enough electricity to supply as many as 45,000 average households.

By September, the company will supply as much as 241 million kilowatt-hours of electricity, which will have been entirely generated from environmentally friendly renewable energy sources, namely from wind, sun, and water, to its household and small business users. Petrol will reduce CO2 emissions by as much as 142 thousand tonnes by providing more environmentally friendly electricity. Its entire network of EV charging stations is also powered by green energy. By combining e-mobility with the generation of electricity from renewable sources and flexible management of charging infrastructure, it is possible to significantly reduce traffic pollution, lower fleet costs, and at the same time, optimally load the electricity network. This is also linked to comprehensive energy solutions for the renovation of commercial and public buildings, as well as solutions for new constructions, which include an installation of its own solar power plant, which, in addition to other devices in the building, also powers EV chargers. These are becoming an increasingly common part of energy solutions for renovations or new constructions.

As Petrol is well aware that renewable energy sources are the future, it also actively encourages their use. The company primarily sees the opportunity in comprehensive energy solutions to reduce energy costs, especially in combination with investments in energy efficiency and energy self-sufficiency from renewable energy sources. Petrol also supplies green energy to industry, which is a major user of energy, and which can significantly reduce the burden on the environment by transitioning to green energy. By utilising a combination of energy efficiency measures, industry can achieve significant energy savings, better working conditions, higher productivity and at the same time, reduced generation of waste through the optimisation of energy systems. Which is the primary motto and desire of Petrol – to create a low-carbon future together with others.

More information with video content about the Ljubač Wind Farm