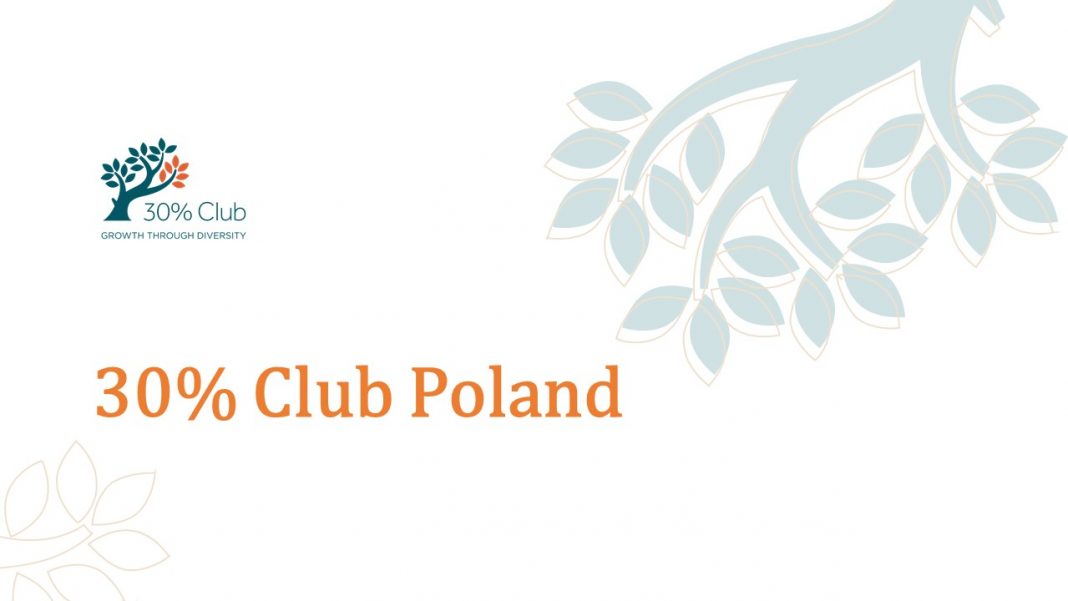 We have recently reported, Poland joined the 30% Club initiative. It is a global initiative promoting the business aspect of diversity is launching in Poland. The goal of 30% Club Poland is to increase the representation of women to at least 30% of management and supervisory boards combined in 140 of the largest Polish listed companies by 2030.

Below we summarized in details what the 30% Club means and why it is worth joining the club for all companies.

1. What is the background of the 30% initiative? Where does it come from originally?

The 30% Club campaign was launched in Great Britain in 2010 by the British financier Dame Helena Morrissey, a long-time fund manager and later CEO. The campaign was started to increase board gender diversity among the largest UK companies so that these could benefit from a diverse pool of talent at the top. The goal of the campaign was to achieve 30% women on the boards of FTSE 100 companies. At that time, the share of women on boards in that index was around 12% so the target of 30% looked aspirational and stretched. The campaign recognised that tone is set at the top and involved top executives in opening doors for women. The target was achieved in September 2018. The current female share of board seats for FTSE100 companies is 37.1% and 34.5% for FTSE350 companies. It now aims to achieve beyond 30% female representation at board and executive committee level. Over the past decade, the campaign evolved globally with 18 Chapters on 6 continents. Currently, the 30% Club is run by Ann Cairns, Executive Vice-President of Mastercard.

The 30% target is a floor not a ceiling and it relates to a critical mass theory and theory of tokenism built around R.M. Kanter’s research. It states that it is not enough for a minority to simply be represented – it must be adequately represented. 30% is a conventional threshold derived from sociological and psychological research at which it is considered that a minority can have a real impact on the group’s actions and decisions. Being a minority is a very difficult task. Even though you meet all the formal requirements, have necessary skills, qualification and experience your membership in the group is not full. Moreover, one representative of a minority is most often perceived in a way that is biased by stereotypes about the group from which he or she comes and his or her distinguishing features tend to be emphasized. So one woman represents “women in general” and there is no space to see that women differ from each other. As a result, the person is under a strong pressure to prove that he or she deserves to be in the place but this can be very exhausting in the long run. The other extreme is exaggerated adaptation to the behaviour and opinions of the majority in order to be “accepted into the herd” which contradicts the idea behind benefits of diversity. If minority representation reaches a critical mass, it ceases to be a “piece of decoration” designed to give the “appearance of diversity” and gains the opportunity to exert real influence. The ultimate goal of the initiative will always be to achieve parity.

3. The 30% Club Poland has just been established. How did you start to organize it?

The idea to bring the 30% Club to Poland was initiated by Milena Olszewska-Miszuris and Aleksandra Włodarczyk in mid-2019. The first part of the process involved contacting 30% Club and gaining the mandate to start activities in Poland as well as finding the team of volunteers supporting the idea and willing to contribute their time and resources to launching Polish Chapter. Subsequently, discussions were held with 30% Club to adapt the targets of the campaign to the local market. With the targets set, the team started to contact CEOs and Chairs of companies which support the concept of diversity and inclusion asking them to join the initiative as members. On top of members, the team was looking for supporters and ambassadors. The efforts have been successful. After gathering 13 founding members, 9 supporters and 5 ambassadors, permission was granted to launch the operations in Poland. The Launch took place on June 9, 2021 via an on-line event with participation on domestic and foreign speakers.

4. Which companies joined so far and why?

30% Club Poland started its activity thanks to the involvement of 13 founding CEO/chair members who signed up to the campaign’s objectives and agreed to promote it. The diverse pool of founding members is ranging from companies from finance and banking sector, through technology, media and telecom to industry sector. We have companies listed on the Warsaw Stock Exchange, as well as private firms or local branches of big international corporations, (listed alphabetically): Katarzyna Byczkowska, Managing Director of BASF Polska; James Van Bergh, Chairman of the Supervisory Board of Benefit Systems; Andrzej Antoń, Chairman of the Supervisory Board of Blue Media; Aneta Kocemba, Managing Director, Credit Suisse Warsaw; Andrzej J. Kozłowski, President of the Management Board, CEO, Emitel; Jarosław Szymczuk, Country General Manager, IBM Poland and Baltics; Bartosz Ciołkowski, General Manager Poland, Czech Rep. & Slovakia, Mastercard Europe; Julien Ducarroz, President of the Management Board of Orange Polska; Paweł Przewięźlikowski, President of the Management Board, Ryvu Therapeutics; Dominika Bettman, President of the Board and Director of Digital Industries, Siemens Poland; Krzysztof Walenczak, General Director, Société Générale Branch in Poland; Piotr Misztal, Chairman of the Supervisory Board, Summa Linguae; and Jacek Świderski, President of the Management Board, Wirtualna Polska.

30% Club Poland does not have a legal form and does not collect fees. In conducting its activities, it benefits from the help of supporting companies. These are (listed alphabetically): ACCA Poland, CMS, Impact CEE, M + G Sp. z o.o. Sp.k.; Polish Economic Institute, PwC, Signium, The Way and UN Global Compact Network Poland.

5. What does it mean for companies who join? In what ways can they benefit from the 30% Club Poland?

Joining 30% Club Poland means signing up to promoting diversity and the Club’s targets:

The starting point of the campaign is 15.5% women on boards of companies in WIG20, mWIG40 and sWIG80 companies at the end of 2020. Boards are understood as management plus supervisory board.

Being a member means lending your name to the campaign to publicly support gender diversity at board levels and acting to change the status quo. In exchange our members can learn from one another and benefit from the experience of international members.

Globally, over 1,000 CEOs and Chairs have signed up for the campaign.

We help our members identify barriers preventing them from benefiting from diversity and support them in eliminating those barriers. By running a cross-company mentoring program we support the development – or pipeline – of diverse talent. Our supporters help the running of the campaign and provide know-how to our members.

6. Is the 30% Club a global initiative with common activities, conferences? Or it is rather the local Clubs working independently?

The 30% Club is a global campaign with the target set at reaching at least 30% representation of women on all boards and C-suites in companies around the world. The campaign plans to grow, there are new countries in preparation for launch and the plan is to be present in all G20 countries.

There is a lot of cooperation and the ideas that have worked in some countries are being implemented to the new Chapters. Also, there is a now a possibility to join the 30% Club as a global member.

Individual Chapters have some autonomy in choosing their initiatives as long as they contribute to the 30% Club’s ultimate targets. The idea behind this approach is that local conditions, corporate cultures and challenges faced by women differ between markets and there is no ‘one-fits-all’ solution. However, there is a lot of know-how shared between Chapters, global events for members and international initiatives. The mentoring program is a good example of this approach – it started as a local initiative, but in 2020 transformed into a global, remote mentoring scheme.

The Club is also holding its first conference in February 2022 that will bring together chapters from around the world.

7. What is the role of the ‘Investor Group’?

30% Club Poland has also launched the Investor Group – a working group of institutional investors who have committed to promoting the initiative. The group consists of: Aegon PTE, NN Investment Partners TFI and Noble Funds TFI. Institutional investors have an important role to play in achieving diversity on corporate boards. Thus, representatives of 30% Club Poland Investor Group intend to raise issues related to the low participation of women in management boards and more often include women in nominations for independent members of supervisory boards.

The 30% Club’s investor groups have become very influential in countries in which it is present and an international group is now being created.

8. What are your future plans?

We have just launched the campaign in Poland, but we have ambitious development plans. We believe that only those organisations that foster truly inclusive cultures – cultures that embrace women – can reach their full potential to positively impact their people, their markets and their communities. That is why we want to engage as many stakeholders as possible. We invite everyone interested in supporting diversity on boards to contact us at poland@30percentclub.org. We plan to develop by acquiring new members, we would like it to be a three-digit number. We want to be active in the local press, television and social media. Our partners and ambassadors will help us communicate and promote gender diversity in company boards. Together, we will support our members and their companies in their efforts to improve diversity. By participating in the club, they can also benefit from the experience of club members from all over the world. We also appreciate the role and assistance of institutional investors in achieving our goals. We are glad that the Investor Group was established together with 30% of Club Poland.

More information about the 30% Club can be found on the Club’s official website.