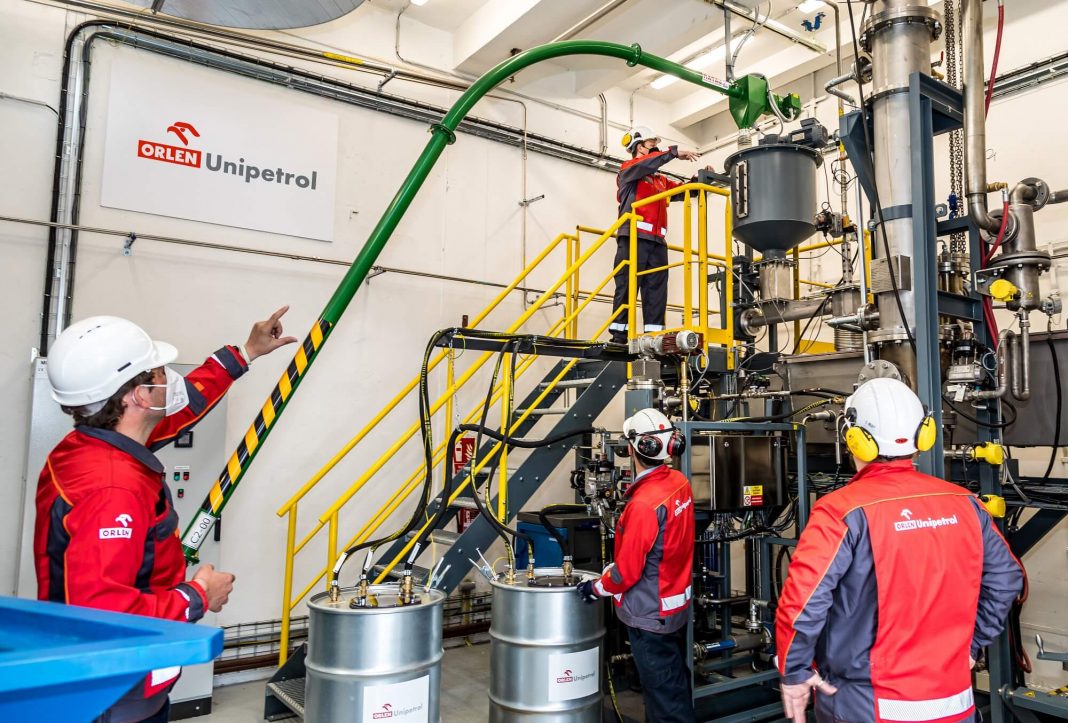 ORLEN Unipetrol has commissioned a pyrolytic testing unit for waste-plastics processing at its chemical plant in Litvínov. It will explore the possibilities of chemical plastic recycling and its potential implementation in standard production in the next three years. By introducing circular economy principles into production processes, the largest petrochemical group in the Czech Republic wants to expand the conventional fuel and plastic production from fossil fuels with new sources that will lead to the decarbonisation of the Czech Republic and compliance with EU policies.

According to the Ministry of Industry and Trade, more than 400,000 tonnes of plastic waste are produced annually in the Czech Republic. Of this amount, approximately 37% of waste plastics are used for recycling, and 18% are used as energy for heat and/or electricity generation.

“Almost half the plastic waste produced in the Czech Republic remains unused now, as plastics recycling is a demanding process. The chemical recycling technology that we are testing can change this,” said Tomasz Wiatrak, CEO and Chairman of the Board of Directors of the ORLEN Unipetrol Group. He added: “Who else but our petrochemical group, one of the pillars of the Czech economy, should be trying to find new solutions and ways forward. By applying the circular economy principles, we contribute to developing a competitive and ecological future of the Czech Republic.”

As a traditional petrochemical manufacturer, ORLEN Unipetrol supplies fuels and plastic products for everyday needs to the Czech and Central European markets. They are made of crude oil imported from all over the world. Recently, the company has been trying to include other input resources into production, mainly such that have been considered waste materials up to now.

“Chemical recycling that uses the principles of pyrolysis – thermal decomposition under elevated temperatures – seems to be a highly effective technology for repeated use of waste plastics. The original waste is highly yielded and transformed into hydrocarbons that can be reintegrated into petrochemical production. This makes the use of existing plastic waste more effective and the carbon footprint significantly lower,” said Tomáš Herink, member of the Board of Directors of the ORLEN Unipetrol Group responsible for production, research and development. He adds: “Our ambition is to chemically recycle waste plastics from our nearest surroundings and the entire Czech Republic within several years.”

The project’s output will be a comprehensive proposal of a technology on an industrial scale based on pyrolysis to process waste plastics and rubber from tyres whose products may be used in the petrochemical industry to manufacture basic chemicals such as ethylene, propylene, butadiene, and benzene. Using subsequent processes, they will then be used to manufacture final petrochemical products – polyethylene, polypropylene, polystyrene, etc. In the refining industry, pyrolytic products will be added to the existing processed raw materials to increase the production of motor fuels, i.e., petrol and diesel fuel.

ORLEN Unipetrol is collaborating on this research project with the University of Chemistry and Technology in Prague and the ORLEN Unipetrol Centre for Research and Education. The costs of acquiring the testing technology amounted to CZK 18 million. They were covered from a contribution from the Ministry of Industry and Trade of the Czech Republic that allocated nearly CZK 7 million from the Operational Programme Enterprise and Innovations for Competitiveness. The costs of the actual research project totalled almost CZK 72 million. The Technology Agency of the Czech Republic contributed CZK 50 million from the TREND subsidy programme.

The ORLEN Unipetrol Group is the largest refinery and petrochemical company in the Czech Republic. It focuses on crude oil processing and on the production, distribution and sale of vehicle fuels and petrochemical products – particularly plastics and fertilisers.