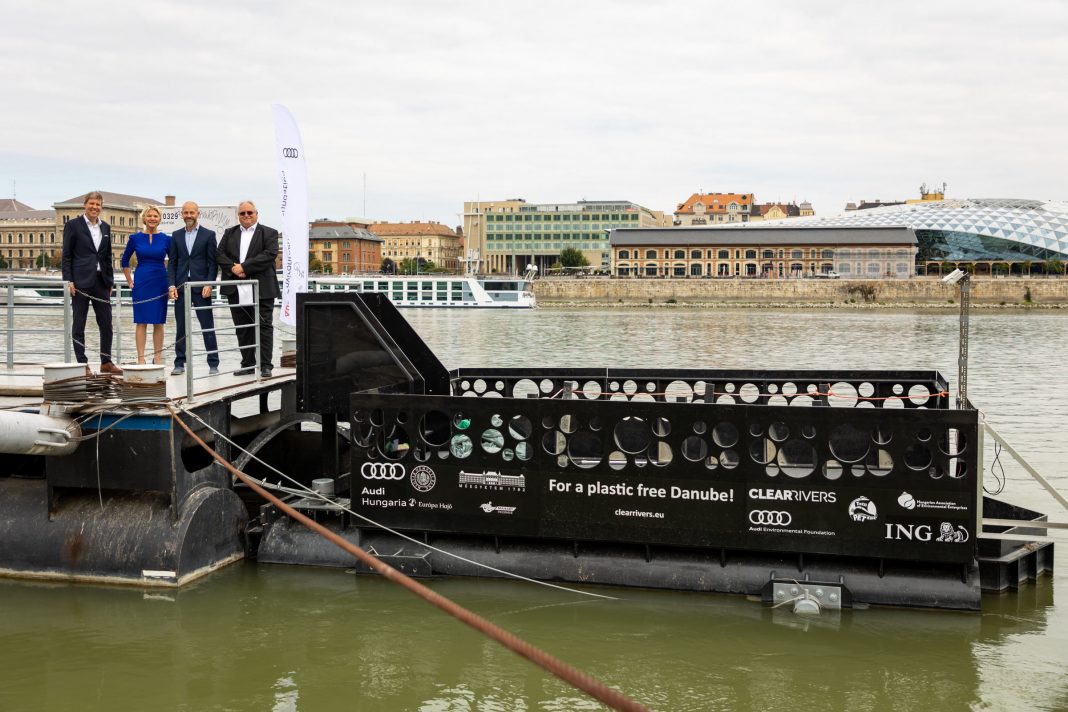 A further milestone has been achieved in the collaboration between the Audi Environmental Foundation and CLEAR RIVERS: In cooperation with Audi Hungaria, a floating litter trap made of recycled plastic has been installed in the Danube. The aim is for this trap to catch carelessly discarded waste from the Danube. The plastic is separated from the remaining waste, recycled in a closed cycle, and processed. Education programs also contribute to explaining the importance of clean bodies of water.

The Audi Environmental Foundation has been working with Dutch non-profit organization CLEAR RIVERS since 2018 already. The collaboration focuses on innovative solutions to plastic pollution in open waters worldwide and raising awareness for the environmental damage caused by waste that is carelessly discarded. As part of this project partnership, CLEAR RIVERS and Audi Hungaria have set up a new litter trap in the Danube in Budapest that is to filter plastic waste from the water.

Rüdiger Recknagel, Managing Director of the Audi Environmental Foundation, emphasized: “Together with our partners, we are campaigning for the protection of our environment. Following the successful installation of previous plastic traps in Rotterdam and the Charleroi canal in Brussels, the litter trap in the Danube in Budapest now adds a further European site where we are actively working against water pollution. More than 90 percent of the plastic in the oceans is transported there via rivers. Avoiding plastic waste in the environment is therefore one of the central aims of our foundation’s work.”

The new litter trap in the form of a mobile plastic catch basin was installed in front of the Budapest University of Technology and Economics. The installation is attached to an existing floating pontoon, from which it can easily be operated. In contrast to conventional nets and vacuum systems, the trap is distinguished in particular by its passive system in streaming waters whose intelligent strutting of partition panels barely interferes with the river as a habitat. This ensures that fish and other river dwellers do not get caught in the catch basin but can dive beneath it.

CLEAR RIVERS not only campaigns for the collection of carelessly discarded waste in bodies of water but also aims to establish a closed cycle for sorting and recycling plastic and upgrading it in order to give it a new life. The collected waste has already been turned into benches that have been set up at multiple Audi production locations. Ramon Knoester, founder of the CLEAR RIVERS initiative, added: “Our projects are focused not only on implementing clean-up projects. We are also aiming to draw attention to the problem of plastic waste in bodies of water with team campaigns or education programs and to raise awareness for the mindful treatment of our environment.”

In addition to installing litter traps, the Audi Environmental Foundation also campaigns for clean bodies of water and the avoidance of plastic in other areas. As part of what are known as plogging campaigns, participants can combine jogging with picking up waste in nature. The URBANFILTER project aims to reduce the amount of microplastic in bodies of water. Together with Technische Universität Berlin, an intelligently connected filter system for street drainage is being developed for the purpose of preventing plastic particles from entering into the sewage system and groundwater.